“THE BOY WHO INVENTED THE BUBBLE GUN”

Feature Film - Based on the novel by Paul Gallico ('The Poseidon Adventure', 'The Snow Goose') 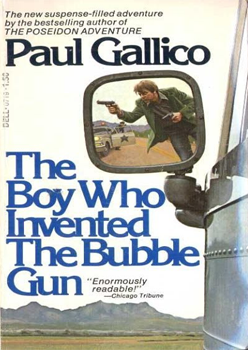 ‘Bubble Gun’ is Gallico at his best – with writing full of brilliant observations of the human condition and an abundance of wry humour.

A young boy, neglected by his wealthy father, takes a bus from Seattle to Washington DC to patent his seemingly harmless invention – a gun that shoots bubbles.

Set in 1974, it is redolent of a time when the United States was in a great period of change. The Presidency, the Vietnam war, the music, a new social fluidity – all are reflected in this touching story of a boy and a young man, each on his own quest to find their rightful place in the world.

An adventure thriller, with lots of jeopardy, all set against the backdrop year of America’s historic identity crisis. It will be a suspenseful, thrilling, roller-coaster adventure tale, with lots of big laughs, and have the makings of a fun filled family entertainment movie with all the trimmings.